Donations from individuals beginning July 2001 were made to the City of Keo to purchase land on the corner of Pine Street and Hwy 232.  In 2004 the City was given property from the estate of Russell Cobb, a former resident.  This enabled the final plans for the Park.  Mr. Cobb requested that all names be placed on monuments at no charge to the Veterans.  Dr. Cobb's gift had been greatly appreciated by all.  Also, in 2004, the first American Flag flown at the Park was the burial flag of local WWII Veteran Harold Anderson  The Anderson family loaned it to the City of Keo for one year.  It was truly an honor for the Veterans Park to fly this flag.

Today, many WWI Veterans have their picture in City Hall thanks to a former Postmaster, W.F. Waller.  During the war years, he collected pictures of all young men entering service and placed their pictures in a large framed shadowbox.  If a Veteran was killed in action or died after that war, Mr. Waller would place a gold star on that Veteran's picture.  Years later the picture box was placed in City Hall.

The original Park Committee consisted of George Waller, a World War II Veteran, Mary Caldwell, Edward Morris, Joanne Oliver, Glo Stachurski and Mr. Ernest Justice.  They worked with the City to develop plans and rules for the acceptance. Architect Bob Schelle, of Cabot, offered to design the Park at no expense.  He spent many hours working with the City and Park Committee on the plans.  The chosen bid presented to the to build the park was submitted by Morgan Construction Company of England, AR.  In May of 2004, the beautiful Park was dedicated with an Honor Guard from the Little Rock Airforce Base and a local Veteran, Lindy Fore, was the speaker.  Over 250 people attended the event.

New Monument with 37 additional names of our Honored Veterans.

“May God bless all those who serve and have served in the military forces of our great nation. Many have given their lives to defend and preserve our God-given rights of life, liberty and the pursuit of happiness, and the free exercise of those rights. It is to them that this Veterans Park is dedicated." 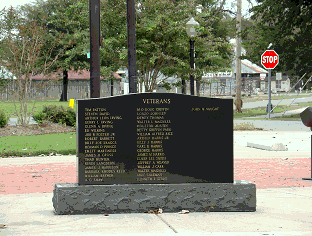 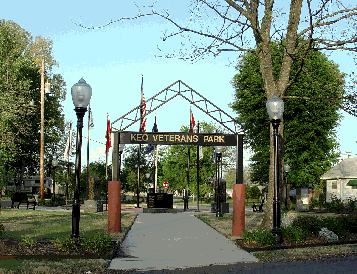